Skip to main content
LAWRENCE — Infectious diseases kill more than 10 million people each year, most of them in the developing world. The high cost of life-saving drugs is one barrier to treatment. Should strong patent protection, which drives up pharmaceutical prices, keep people from getting the medicine they need to survive? 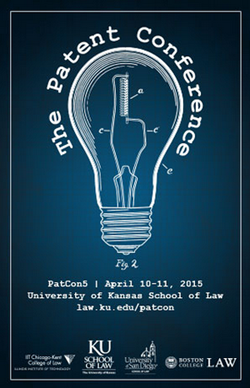 It’s one of many questions that scholars will explore during the fifth annual Patent Conference on April 10-11 at the University of Kansas School of Law. Patent scholars from nearly a dozen countries and four continents – in law, economics, management science and other disciplines – will share the latest research on patent law, policy and business. The program is free, and registration is not required.

Plenary speakers include Colleen Chien, Santa Clara law professor and former senior adviser to the White House Office of Science and Technology Policy; Eric von Hippel, economist and professor at the MIT Sloan School of Management; and A. Christal Sheppard, director of the U.S. Patent and Trademark Office satellite branch in Detroit.

“One of the most exciting aspects of PatCon is the opportunity not only to share bleeding-edge patent research but also to hear the debates this research spurs among the leading patent experts who attend,” said Andrew Torrance, professor of law and co-founder of the conference. “For example, one of the hottest topics in patent law today involves so-called ‘patent trolls’ and how they either promote or harm innovation. In fact, many of the scholars at PatCon have signed one of two competing letters sent to Congress just two weeks ago raising serious concerns about trolls.”

Other topics will include the role that patents play in inequality, international patent issues, patent policy, how to value complicated property rights like patents, whether patents promote or crush innovation, and exploding interest in design patents.

“Another exciting phenomenon is the rise of ‘big patent data,’ which scholars are increasingly using to answer fundamental questions about the patent system and even to challenge long-accepted legal doctrines,” Torrance said. “Some of the leading ‘big patent data’ experts will be presenting their latest, often surprising, results at PatCon.”

The program is co-sponsored by the KU School of Law, Hovey Williams LLP and Lathrop & Gage LLP.

Preview the schedule and speakers.