LAWRENCE – A University of Kansas School of Law team brought home second place after rising to compete in the final round of one of the largest National Native American Law Students Association Moot Court Competitions in history. 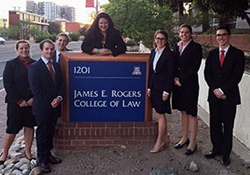 KU law students Corey Adams, of Wichita, and Maureen Orth, of Prairie Village, placed second in the NNALSA competition at the University of Arizona March 6-7. Two additional KU teams competed at the event, including Annette McDonough, of Phoenix, and Samantha Small, of South Haven, who advanced to the Sweet 16 round; and Grant Brazill, of Las Vegas, and Jason Harmon, of Orem, Utah.

“This year’s moot court problem focused on the extent of a tribe’s jurisdiction over a non-member Indian,” said Professor Elizabeth Kronk Warner, team coach and director of KU’s Tribal Law and Government Center. “The hypothetical non-member Indian sold important cultural property of the tribe to non-Indians, and the students were asked to consider whether the tribe could attach its adjudicatory and regulatory jurisdiction to her actions.”

Teams prepared for the competition by researching and preparing their written briefs, participating in practice rounds, and receiving feedback from faculty judges and teammates.

“All the KU teams contributed to our success in the final competition,” Orth said. “All six of us worked outside of practice to try new themes, new arguments and to give each other feedback.”

Participating in the competition helped students prepare for their future legal careers, Adams said. “I feel like I am much better at articulating a coherent legal argument. I see both sides of an issue and am better at making my arguments as concise and persuasive as possible.”

“Exceptional legal writing and oral advocacy skills are necessary to succeed in moot court competitions,” Kronk Warner said. “Students’ success in this competition is proof of their extraordinary skills, which are the foundation of the legal profession.”

With more than 70 teams, this year’s competition was one of NNALSA’s largest ever. KU students defeated teams from Columbia University in New York City, Hawaii and Seattle. The final rounds were judged by accomplished Indian law scholars and judges, including the chief justice of the Navajo Nation Supreme Court and a judge on the U.S. District Court for the District of Arizona.