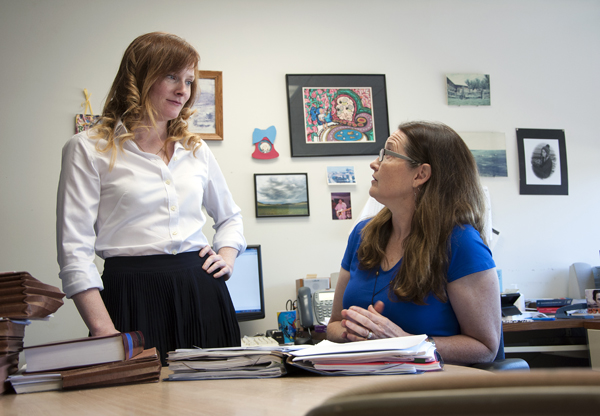 LAWRENCE – A learning experience for one University of Kansas law student turned into a second chance last week for a woman serving life in prison in connection with a high-profile Topeka murder.

The 10th U.S. Circuit Court of Appeals on July 15 ruled that Kimberly Sharp was unconstitutionally convicted in the 2006 slaying of a Topeka homeless advocate. The court handed down the decision based on an appeal by KU’s Project for Innocence and Post-Conviction Remedies.

“We determine Ms. Sharp’s confessional statements following the promise of no jail time were involuntary, the state trial court erred by admitting them at trial in violation of Ms. Sharp’s Fifth and Fourteenth amendment rights, and the error was harmful,” judges wrote in a 3-0 decision.

Abby West, a 2015 KU Law graduate from Shawnee, authored the brief in the Sharp case while enrolled in Project for Innocence last summer. She spent hours poring over trial documents and prior decisions, including an unsuccessful appeal to the Kansas District Court. Project Director Jean Phillips supervised West’s research and writing.

“It was overwhelming at the beginning because I had never done any criminal defense work before,” West said. “At the same time, it was really interesting to familiarize myself with the case. I never got to meet Kim, but I read so much about what happened to her.”

In challenging the constitutionality of Sharp’s conviction, West set out to prove that her client’s rights to due process and equal protection under the law were violated when the trial court admitted statements Sharp made to police that were not freely and voluntarily given.

Sharp made those statements to police during the course of their investigation into the murder of David Owen, a self-professed homeless advocate known for ransacking homeless camps. In June 2006, he confronted Sharp and her three male co-defendants at a Topeka homeless camp.

After a brief altercation, two of the men dragged Owen into the woods and tied him to a tree, where he was later found dead. During an interview and re-enactment with police, Sharp made statements that implied she was a minor participant in the events and was subsequently charged in state court with first-degree felony murder and kidnapping.

Sharp moved to suppress her confessional statements, arguing they were involuntary because the police promised she wouldn’t go to jail and to help find shelter for her and her two young children. That effort failed in Shawnee County District Court, and a jury found Sharp guilty on both counts. The Kansas Supreme Court affirmed, and the U.S. District Court for the District of Kansas denied Sharp’s petition for habeas relief.

After reviewing the interrogation videos, however, the 10th Circuit agreed that Sharp cooperated with the interviewing officer because he promised no jail time and that any statements she made after that promise should not have been admissible in court. The state now has the option to retry Sharp.

“Our goal in the project is for students to take ownership of their cases. We don’t want them to be glorified paralegals,” Phillips said. “I’m the safety net to make sure that nothing gets missed and everything gets argued. But Abby took ownership. She did a great job with that brief.”

West, who is studying for the bar exam and finalizing her job plans, was excited to learn about the court’s favorable decision. Working on Sharp’s case and others in the Project for Innocence proved to be the best experience she had in law school.

“It was the one chance I had to work for a client who really needed my help. There are people out there who don’t have access to the justice system,” West said. “It showed me how important it is – even if you do corporate law – to try and do pro bono work or donate to people who do. As a law student, I see it as a privilege to be able to get this education. I think we have a duty to the public to give back.”