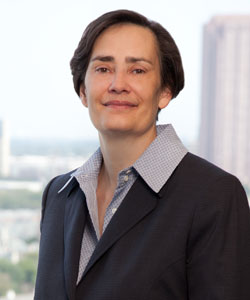 "I learned how to dream about a career at KU — everything from a small-town practice to working at the largest firms. I had all those possibilities by getting an education at KU."

A farm girl from rural Kansas, Elizabeth Schartz grew up knowing she would be a lawyer.

“There were five girls in our family, so we had an elaborate chore distribution,” Schartz said. “I thought the arrangement was patently unfair, and when I complained about it I was told to take it to the Supreme Court. I didn’t know what that meant, so I asked my dad.”

Schartz’s father explained that the Supreme Court was a “group of judges that all the other judges, Congress and the president had to listen to,” and that one had to study hard, get good grades and go to law school to get there.

“I had to have been 8 or 9 years old at the time, and I announced, ‘I’m gonna be a lawyer,’” Schartz said. “I didn’t know any lawyers; We didn’t have any lawyers in our family. Neither of my parents went to college. But no one laughed at me or said I couldn’t do it, so I did it.”

It was a big leap from rural Cimarron to the state’s largest university, but Phil and Pat Ridenour, a husband-wife team of KU Law graduates, convinced Schartz to make the move. The Ridenours, both from rural communities, excelled at KU and built a successful practice in Cimarron. “Had I not had that encouragement, I’m not positive I would have gone to KU,” Schartz said. “For a small-town girl, it seemed such a big university.”

Law school brought academic challenge and classmates from prestigious universities. Schartz graduated from a small liberal arts college in western Kansas. “Although I didn’t have the undergrad credentials, I appeared to be just as smart as they were,” Schartz said. “I decided that just meant I needed to work harder.”

Schartz built relationships with her professors, who encouraged her to apply for a clerkship. She spent a summer working at Foulston Siefkin in Wichita alongside talented attorneys, many of them KU graduates from small towns. “It was a revelation about the work they did and the level of sophistication,” Schartz said. “It opened a world of possibilities that didn’t exclude staying in Kansas but also didn’t exclude working in a big city.”

After graduation, Schartz accepted a position with Thompson & Knight in Dallas. “My thought was I would come to Dallas for a few years, learn what it was like to practice at a big firm, then come back to Kansas,” Schartz said. Twenty-five years later, she’s still in Dallas.

Schartz practices employment law, representing management and offering day-to-day advice. She is drawn to the dynamic nature of the field with its new statutes and ever-changing interpretations, and opportunity for advocacy through litigation. “The clients we deal with want to do the right thing, and we can help them do that,” Schartz said.

Schartz works alongside attorneys with diverse educational backgrounds, but she feels KU’s small class sizes and accessible faculty gave her an advantage. Clinical programs are also an asset. “It used to be the firms were looking for just the best and brightest — good writers, deep thinkers,” Schartz said. “Today, firms want lawyers to have as much practical experience as they can stepping out of law school.”

Perhaps the most important thing Schartz learned at KU was how to dream, and dream big.

“I learned how to dream about a career,” she said. “The great thing about that dream was that it included everything from a small-town practice to working at the largest firms out there. I had all those possibilities by getting an education at KU. None were closed to me. That’s as true today as it was when I stepped foot on campus in ’85.”