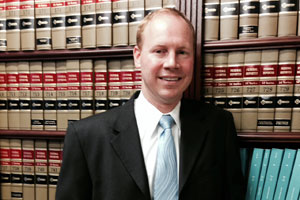 "KU gave me the freedom to pursue the type of law I wanted to practice, and to practice it how and where I wanted."

Justin Hendrix studied nuclear and mechanical engineering as an undergraduate, but it was an internship in Washington, D.C., that ignited his interest in law and public policy.

“I had learned the science, but I wanted to understand law and the legislative process,” Hendrix said. “For me, law school was the best way to do that.”

Today, Hendrix explores both law and science in a career focused on intellectual property. The KU alumnus currently clerks for Judge Alvin A. Schall at the U.S. Court of Appeals for the Federal Circuit, which handles patent law, international trade issues, and Veterans Affairs cases, among other things.

“It’s a fun part of the job, combining the science and engineering with the law, whether it be software or high-tech inventions,” Hendrix said. “You have to learn the engineering and science aspect, too, and that’s fun for me.”

Although he grew up in Kansas, Hendrix always thought he might eventually want to practice on the East Coast. “In picking a law school, the decision for me was between going to KU or an East Coast school, considering the traditional wisdom that you go to school where you want to work,” Hendrix said. “When I read about KU and looked to see what other students had done, it was clear that KU grads were working everywhere. A lot find jobs in the Midwest, but a lot work on both coasts. I went to KU knowing all options would be open.”

Hendrix also sought a school with an affordable price tag so that he would be free to pursue the career path he wanted. “If I wanted to do public policy or government work but had $150,000 in debt, is it even possible?” Hendrix asked. “I didn’t want to be saddled down with that much debt. KU provided an alternative. KU had faculty with impressive credentials, a track record of alumni that were working all over the country, and a price that couldn’t be beat. KU gave me the freedom to pursue the type of law I wanted to practice, and to practice it how and where I wanted.”

Following a summer internship with intellectual property law firm Finnegan, Henderson, Farabow, Garrett & Dunner LLP in Washington, D.C., Hendrix accepted a position with the firm after graduation. He practiced patent law there for four years before beginning his clerkship at the Federal Circuit. When his clerkship ends, Hendrix plans to return to patent law, this time practicing at Finnegan’s Palo Alto, California, office.

Whether he remains on the coast or eventually returns to the Midwest, Hendrix knows that his KU Law degree will continue to serve him well.

“There are a lot of KU Law graduates who work in the Midwest and stay there for good reason,” he said. “But there’s no reason you can’t work on either coast or anywhere in between.”