The University of Kansas School of Law hosts a variety of events throughout the year, including an engaging series of conferences, workshops, lectures and symposia. Events feature nationally recognized scholars and speakers exploring timely topics in the law. For a full list of upcoming events, visit the KU Law Events Calendar. 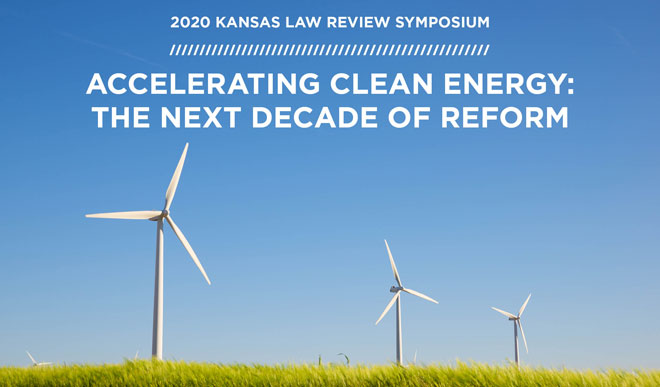 Renewable energy, such as wind and solar power, has become an essential resource. Current legal frameworks have supported significant wind and solar energy, but are they sufficient to accelerate clean energy in the next decade? Speakers from across the nation will discuss "Accelerating Clean Energy: The Next Decade of Reform” at the 2020 Kansas Law Review Symposium.

The online event is free and open to the public, but registration is required. Register and preview the complete schedule online.

The University of Kansas School of Law welcomes election law scholar Franita Tolson for a virtual lecture event this fall. Tolson will present "The Inevitability of American Democracy" on Thursday, Nov. 5, via Zoom.

Franita Tolson is Vice Dean for Faculty and Academic Affairs and Professor of Law at the University of Southern California Gould School of Law. As a nationally recognized expert in election law, Tolson has written for or appeared as a commentator for various mass media outlets including The New York Times, Reuters and Bloomberg Law. She is an election law analyst for CNN during the 2020 election cycle. Her research on election law, constitutional law, legal history and employment discrimination has appeared in leading law reviews including the Yale Law Journal, University of Pennsylvania Law Review, Vanderbilt Law Review and Boston University Law Review. Her forthcoming book, In Congress We Trust?: Enforcing Voting Rights from the Founding to the Jim Crow Era, will be published in 2021 by Cambridge University Press.

The lecture is free and open to the public, but registration is required. Register for the Fall 2020 Plenary Lecture.

The Diplomat’s Forum is the law school’s most prestigious international and comparative law event. Its aim is to provide a platform for an open sharing of thoughts on international law and relations and the United States through the perspective of a professional with notable diplomatic experience in the service of a foreign government.

Past Diplomat's Forum speakers and topics

The Casad lecture series is named in honor of Professor Emeritus Robert C. Casad, who has been on the faculty at the KU School of Law since 1959 and is internationally known for his scholarship in comparative civil procedure. In 1997 he retired from classroom teaching but continues to conduct research and publish books and articles.

Past Casad lecture speakers and topics include: