LAWRENCE — A Kansas Supreme Court justice, a former state legislator and a former chairman of the Kansas Board of Regents have received the highest honor given by the University of Kansas School of Law. 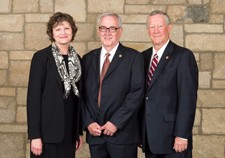 Justice Carol Beier, Class of 1985, Timothy Emert, Class of 1965, and John Vratil, Class of 1971, received the Distinguished Alumni Award during a ceremony Saturday, May 11, in Lawrence. The award is presented annually to graduates who have distinguished themselves through exemplary service to the legal profession, their communities, KU and the state or nation.

“Justice Beier is an active and loyal alumna who has worked to improve the law school experience for all its students,” said Stephen Mazza, dean of the law school. “She has had incredible success in the legal profession, and she used her success to benefit her community, her state and her alma mater.”

“Regent Emert is the consummate public servant. He has spent a good portion of his legal career pursuing policies that have benefited the people of Kansas. And John Vratil’s devotion to improving the educational system for all Kansans is worthy of merit. The law school is honored to have him as a graduate.”

Also recognized at the ceremony were new recipients of the James Woods Green Medallion, named in honor of the law school’s first dean. The school presents medallions to its major financial contributors. This year’s honorees were Jennifer Gille Bacon, Class of 1976; William (Brad) Bradley Jr., Class of 1980; Richard Sias, Class of 1954; Charles Hostetler, Class of 1963, and Julie Hostetler; Jeffrey S. Nelson, Class of 1980, and Lisa K. Nelson; Patrick Peery, Class of 1981; the law firm of Snell & Wilmer LLP; and John Stewart, Class of 1940, and Hannah Stewart.

Appointed to the Kansas Court of Appeals in 2000 and the Kansas Supreme Court in 2003, Justice Carol Beier is the first female graduate of the KU School of Law to serve on the high court. She has authored about 600 judicial opinions for the citizens of Kansas. A native of Kansas City, Kan., Beier graduated from KU with a bachelor’s in journalism in 1981 and a law degree in 1985. In 2004, she received her Master of Laws from the University of Virginia School of Law. She began her legal career as a law clerk to Judge James K. Logan of the U.S. Court of Appeals for the 10th Circuit and then worked on family income security, education and employment issues at the National Women’s Law Center. Beier entered private practice at Arent, Fox, Kintner, Plotkin & Kahn and later became a partner at Foulston Siefkin LLP in Wichita. Beier’s community and professional service includes membership in the National Association of Women Judges, Kansas Bar Association and Kansas Women Attorneys Association. She was named to the KU Women's Hall of Fame in 2012.

Timothy Emert is the only Kansan to have served as chairman of the Kansas State Board of Education and the Kansas Board of Regents. He earned a bachelor’s in journalism in 1962 and a law degree in 1965 from KU and entered private practice as a sole practitioner in his hometown of Independence, Kan., where he has continued to live for 48 years. He was a member of the Independence Public Library board of directors, the local board of education and the Kansas State Board of Education. His public service continued in the Kansas Senate, where he represented the 15th District for eight years, spending four years as majority leader and six years as chairman of the Judiciary Committee. Emert has served as a member of the Kansas State High School Activities Association, Kansas Commission on Public Broadcasting and Kansas Children’s Campaign. After leaving the legislature, Emert served as chairman of the advisory board for the Juvenile Justice Authority and a member of the Kansas Governmental Ethics Commission. In 2010, he was appointed to the Kansas Board of Regents by Gov. Mark Parkinson.

John Vratil graduated from KU with a bachelor’s in education in 1967 and a law degree in 1971, having served as an editor of the Kansas Law Review. He received a scholarship through KU’s Direct Exchange Program and continued his studies abroad at the University of Exeter in England. Vratil was a partner with the law firm of Lathrop & Norquist (later Lathrop & Gage) from 1992 to 2011, where his litigation practice focused on matters involving school law and finance, property taxation, contracts, employment claims, secured transactions, real estate and zoning. He currently serves as general counsel for the Blue Valley Unified School District. A Republican representing the 11th District, Vratil was first elected in 1998 and served three terms in the Kansas Senate, including 11 years as Senate vice president. Vratil was president of the Kansas Bar Association in 1995-1996 and served on the Kansas Judicial Council from 2001-2009. In 2012, he received the Friend of Education Award from the Blue Valley School District and the Leawood Chamber of Commerce Hall of Fame Award.