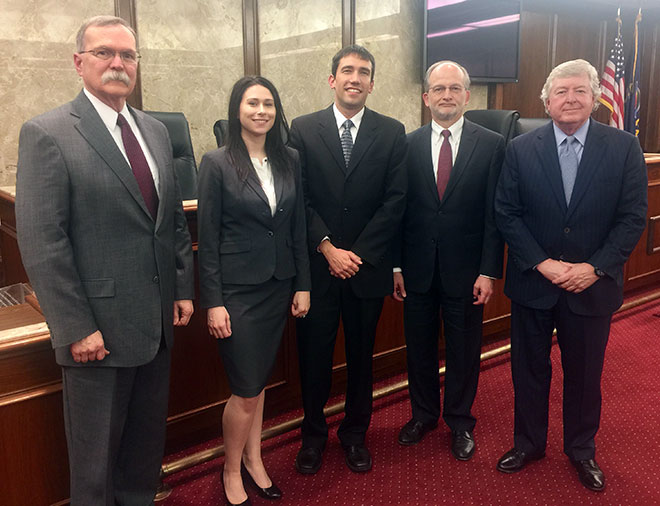 LAWRENCE – A pair of University of Kansas School of Law students is heading to New York City after winning first place in the regional rounds of the prestigious National Moot Court Competition.

Ashley Billam, of Olathe, and Sam LaRoque, of Shawnee — both second-year law students at KU — defeated the University of Oklahoma to capture the title during the regional competition Nov. 18-19 at Washburn University School of Law. They also won the award for best petitioner brief. Billam and LaRoque will represent KU at nationals Jan. 30-Feb 2, 2017, in New York.

“We both poured a lot into preparing, and I’m very glad it paid off and we get to move on to nationals,” LaRoque said. “Arguing the final round in front of a panel that included the chief justice of the Kansas Supreme Court was a real thrill.” Kansas Supreme Court Justices Lawton Nuss and Dan Biles and Kansas Appeals Court Judge Steve Leben presided over the final round. Judges do not learn which schools the teams represent until the competition concludes.

More than 120 schools compete each year in the National Moot Court Competition. Sponsored by the American College of Trial Lawyers and the New York City Bar, it is one of the oldest and most prestigious moot court tournaments in the nation.

Billam gained confidence from the experience.

“Moot court was an extremely challenging but fun experience that helped me overcome my fear of public speaking,” she said. “As 2Ls competing for the first time, we never expected to get past regionals.”