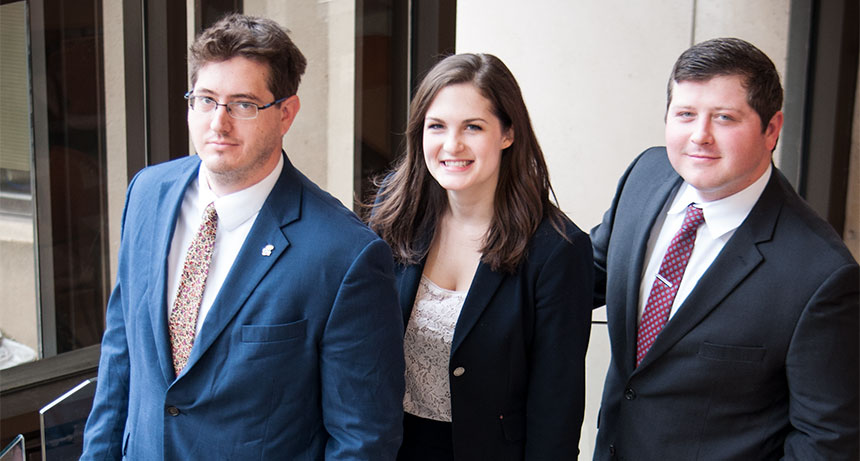 LAWRENCE – A University of Kansas School of Law mock trial team is heading to nationals after winning the qualifying rounds of the National Trial Competition this month in Fargo, North Dakota. 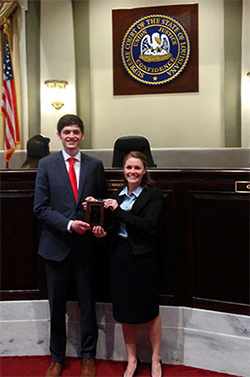 Third-year KU Law students Jordan Kane, of Overland Park, Ben Stringer, of Jacksonville, Florida, and Joe Uhlman, of Sedgwick, came out ahead of teams representing 11 other law schools from seven states to win Region 9 of the competition, sponsored by the Texas Young Lawyers Association. They will compete in the national rounds April 4-8 in Austin, Texas.

“It’s nice to see our hard work pay off in a tough competition,” Kane said. “We knocked out two undefeated teams and got great litigation experience. I am grateful that mock trial gives me the opportunity to flex my trial muscles before I leave law school.”

“Mock trial has been one of the most meaningful experiences of my time at Green Hall,” Stringer said. “I am excited for one last shot to represent KU Law at nationals and show everyone in Austin we can compete with the best in the country.”

KU Law’s moot court program ranks 17th in the nation, according to rankings published by the University of Houston Law Center. KU law students accumulated enough points during the 2016-2017 season to break into the top 20 for the second year in a row, rising two spots above KU Law’s No. 19 ranking for the 2015-2016 season. Moot court competitions simulate appellate court proceedings, with students submitting a written brief and presenting oral arguments to judges. Conversely, mock trials allow students to practice lower-court trials – representing a party, preparing a case for trial and trying the case to a jury.