LAWRENCE — Plenty of people go back to school at a nontraditional age. But most of them don’t take classes for a doctorate at a school in which they are also a professor. Or while they are practicing law full-time. Or at the age of 72.

But that’s exactly what Bruce Hopkins did when he decided to get an SJD at the University of Kansas School of Law, where he also serves as a professor from practice. He details his experiences in having the same young people as students and classmates, attending classes with professors many years his junior and answering why he was doing such a thing to just about everyone in his new memoir “SJD: What’s the Point of Three (Law Degrees)? The Adventures of an Older Lawyer Who Returned to Law School for the Third Degree.” 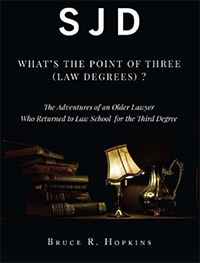 A well-established and respected lawyer in the field of tax-exempt and nonprofit law, Hopkins is no stranger to the classroom or writing. Approaching his 50th year in practicing law, he has written more than 30 books, most of them on all manner of tax-exempt or nonprofit legal topics. He earned his first two law degrees from George Washington University Law School in Washington, D.C. He practiced there for many years, often thinking about getting the SJD, or Scientiae Juridicae Doctor, commonly known as the equivalent of a Ph.D. in law. But at the time George Washington and Georgetown did not offer it. He considered Harvard, but the commute proved impractical.

About 20 years ago he moved to the Kansas City area and began practicing his specialty there. In 2008, he became an adjunct professor at KU, eventually becoming professor from practice in 2015.

“It’s an odd thing,” Hopkins said of the decision to go back to school. “I’d wanted to do this for a long time. Part of it was like a mountain climber looking at a mountain. It was right there. I’d wanted to do it for a while, so I did.”

He didn’t want to have regrets or excuses about age, lack of time or money or fears of flunking out of the school at which he teaches to get in his way, although he admits many of those reservations did enter his mind. In 2013, he enrolled in classes while still teaching his class on nonprofit organizations and law and while practicing law in Kansas City.

The book begins by addressing the question he gets most often: Why? Why would he possibly consider doing this, many asked. Many lawyers didn’t even know the degree existed and told him he was wasting his time and money. Fellow lawyers had told him they’d sworn they’d never attend another law class after completing their degree and passing the bar. As one can imagine, there were many unique happenings, which he outlines in the memoir.

“The problem was I was about 72 years old, which seems young now,” Hopkins said with a laugh. “One of the peculiar things was teaching here (at KU) while also being a student. There was some overlap.”

Students would be sitting next to him as peers during one class, then be sitting in front of him learning from him in another. The professors who taught his classes were all younger than him. And he had the same challenges as any other student, writing papers, completing assignments, taking tests and taking courses such as banking law and tax procedure, which proved to be exceedingly difficult, he said.

Throughout the chapters of “SJD” he tells of his adventures, from telling his boss at his old firm he was seeking the degree, to class assignments all the way to the culmination at his graduation party, returning again in the final chapter to the question of why. The experience was “exhilarating,” Hopkins said, not only teaching him more about the law, but giving him a new appreciation for law professors and opening him up to the perspectives of today’s students.

The idea to write a memoir about his unique experiences was only natural, given that he’s written more than 30 books already. But the style was completely different than his legal books and his monthly newsletter on tax-exempt law. No stranger to writing, he was still daunted by the idea of writing a dissertation. He did, and defended it in front of Stephen Mazza, dean of the KU School of Law, and Michael Hoeflich, the John H. and John M. Kane Distinguished Professor of Law and former KU Law dean, both of whom the book is dedicated to.

“You don’t want to be interrogated by Professor Hoeflich if you can avoid it. It was both fun and kind of terrifying,” Hopkins said.

But the dissertation was successfully defended, and true to his prolific writing career, Hopkins has already expanded it into another book, which will be published soon. Mazza served as his adviser, and Hoeflich was impressed enough to agree to write an introduction for the book. He writes of being surprised that someone of Hopkins’ stature would be enrolled in his class for credit.

“Frankly it never occurred to me that a senior lawyer would have the intellectual curiosity, drive and sheer stamina to do a full-time doctoral program, carry on a full legal practice and supervise a publishing mini-empire,” Hoeflich wrote. “And yet that is precisely how I would characterize Bruce Hopkins. He is one of the most remarkable men and lawyers I have ever known.”

With the third degree now obtained, Hopkins says it was well worth the time and effort, though he jokes that he is glad the field does not offer a fourth degree. A memoir now published, he plans to continue representing nonprofit organizations, scientific and religious organizations, charities and schools and writing.

“It’s one of those things. If you want to do it you find the time,” he said of writing. “The first thing I do when I get to the office is write. And I do it as long as I can get away with it. The book is designed, at least in part, to get people thinking. It doesn’t have to be an SJD, or even going back to school, but seeing something you want and going after it. There’s something about the degree that sort of freed me. I don’t think I could’ve written a book like this 20 years ago. Some of the things I say I don’t think I would’ve had the courage to say then.”