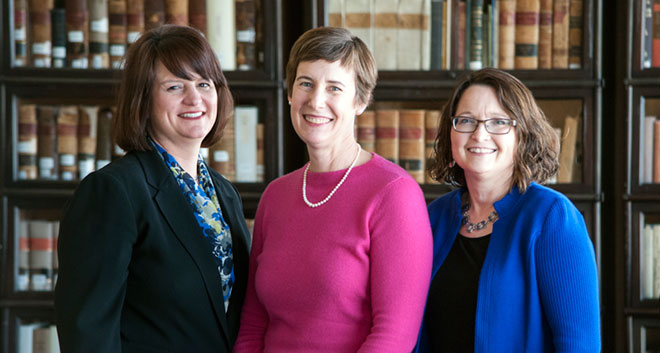 LAWRENCE – Three University of Kansas law professors were recognized this week for demonstrating “compassion, dedication and tenacity” through nearly a decade of work to free an innocent man from prison.

The three were singled out for their leading role in winning the exoneration of Floyd Bledsoe, who spent 16 years behind bars for a murder he didn’t commit. Students and faculty in KU Law’s Project for Innocence worked on Floyd’s case for nearly a decade before new DNA evidence and a suicide note confession from his brother cleared his name.

“The best feeling a lawyer can have is walking out of court or prison with an innocent client who is finally being freed after a decade or more of wrongful incarceration. Everybody would love to have that feeling, but few lawyers are willing to do what it takes to get there,” said Sean O’Brien, associate professor at the UMKC School of Law and the award’s namesake. “The work of Jean, Beth and Alice reminds me of something Mother Teresa said: ‘There are no great deeds, only ordinary deeds, done with great love.’ That’s what these lawyers are all about.”

Through its partnership with KU Law, the Midwest Innocence Project provided funding for new DNA testing in Floyd’s case.

“The MIP working with KU Law is a model of what legal partnerships can be,” said Oliver Burnette, executive director of the MIP. “Since the Paul E. Wilson Project for Innocence is such a recognized source of expertise and dedication, MIP’s resources and legal team can act as a force-multiplier for the good work already being done.”

All three honorees graduated from the KU School of Law in the 1990s and worked on the Project for Innocence – then known as the Defender Project – during law school. Phillips has served as director of the project since 1999. She hired Cateforis as a supervising attorney that same year, and Craig joined the team in 2004.

“I had the good fortune to learn from David Gottlieb, and he taught me the dangers of passing judgment and failing to see that human beings are worthy of respect and compassion. I left that experience knowing that I was put here to battle against simply putting people in prison and forgetting about them,” Phillips said. “We look forward to a time when we actually work ourselves out of a job. One client at a time – one Floyd Bledsoe at a time – we get a little bit closer to that goal.”

The Project for Innocence was founded by former KU Law Professor Paul E. Wilson as the Defender Project in 1965 to help prisoners who otherwise might not receive legal representation. Working under the supervision of faculty attorneys, students in the clinic represent state and federal prisoners in appellate and post-conviction litigation in state and federal courts. The program has won more than 40 direct appeals, constitutional challenges and actual innocence cases since 2008.

The Midwest Innocence Project, a member of the national Innocence Network, is dedicated to the investigation, litigation and exoneration of wrongfully convicted men and women in Kansas, Missouri, Arkansas, Iowa and Nebraska. The MIP partners with KU Law’s Project for Innocence and other regional innocence organization by providing legal and financial support to enhance local exoneration efforts.